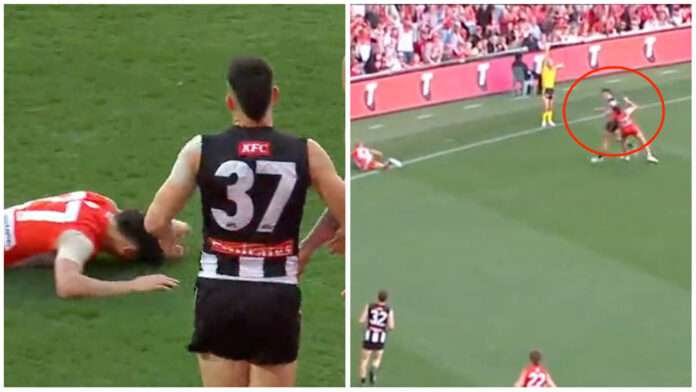 All-Australian Collingwood defender Brayden Maynard may face a nervous few days should his side proceed to the 2022 AFL Grand Final, with an off-the-ball hit on Swan Justin McInerney potentially gaining scrutiny of the Match Review Officer.

The incident took place in the final minutes of a heated opening term between the Magpies and Swans at the SCG, with the ball going out of bounds on the wing in a contest between Steele Sidebottom and Lance Franklin.

Just metres away from the contest Maynard is seen collecting McInerney without the young Swan seeing the Pies defender coming.

The hit put McInerney to the floor, with the umpire awarding a free kick against Maynard for his actions.

While unlikely to warrant a suspension, the MRO are set to assess Maynard's actions, which could likely warrant a charge.

Is Brayden Maynard in any trouble for this? 🤔

A grading of intentional conduct, medium impact and body contact would warrant a one-game ban.

Should the level of impact be seen as low, which could be the case, Maynard would be hit with a fine by the MRO.

The winner of Saturday's preliminary final will face Geelong at the MCG next weekend for the 2022 AFL premiership.