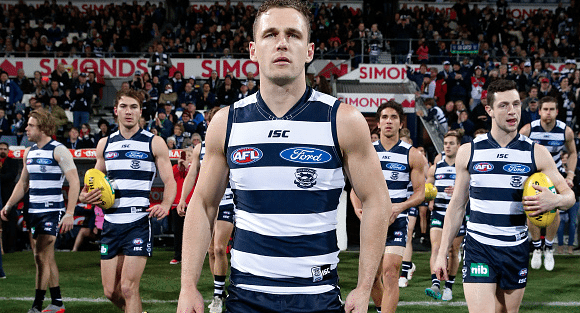 Geelong has admitted it sourced a drug from a company connected with controversial sports scientist Stephen Dank in 2009.

The Herald Sun today revealed that the AFL anti-doping hearing outlined that ex-Geelong fitness boss Dean Robinson used the services of Dank while at the Cats.

Geelong tonight released a statement in response to the claims.

“In 2008 or early 2009 Stephen Dank’s professional services were recommended to the club,” the statement read.

“Our then Assistant General Manager of Football Operations Steve Hocking met with Dank in regard to this, but after that meeting the club decided not to engage Dank’s services.

“At no time did Dank have a position with our club.”

However, in 2007 Geelong sourced a drug from a company connected to Dank in relation to Max Rooke’s injured hamstring.

“The club sourced Actovegin from a company that was connected to Dank,” the Cats said.

“These facts were all made known to the AFL and ASADA in 2013 during their investigation.

“Dank had no connection with our players in this process.”

The AFL released a statement on Monday re-iterating that Geelong had no case to answer.

“The AFL joint investigation with ASADA fully and forensically investigated the Geelong Football Club, which included seizing all email, phone and computer records,” the statement read.

“The AFL is aware that Actovegin was purchased. Actovegin is not a prohibited substance.