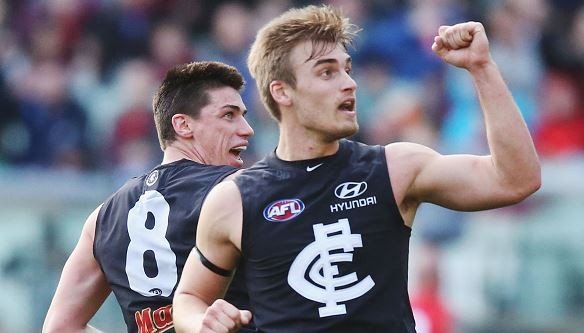 The Blues have de-listed Cameron Giles and Matthew Watson, along with rookies Blaine Johnson and Fraser Russell.

The four de-listings make a total of eight list changes for Carlton, after Andrew Carrazzo, David Ellard and Chris Judd all retired and Lachie Henderson requested a trade.

Carlton’s Head of Football Andrew McKay thanked the players for their service to the club.

“Each of these players has made a contribution to our football club and I would like to thank them for their hard work over the journey,” McKay said.

“Matthew Watson departs after 23 AFL games and Blaine Johnson after seven; both provided some exciting moments for us.

“Unfortunately injury restricted Cameron Giles to just seven games in the VFL and much of his time at Ikon Park was spent in rehabilitation. He should be commended for all his hard work and the way he went about his rehab.

“Likewise Fraser Russell, who was a Category B rookie, never made his debut at the senior level, but he worked hard and made a solid contribution to the Northern Blues.

“On behalf of everyone at Carlton I would like to wish these players all the very best for the future.”