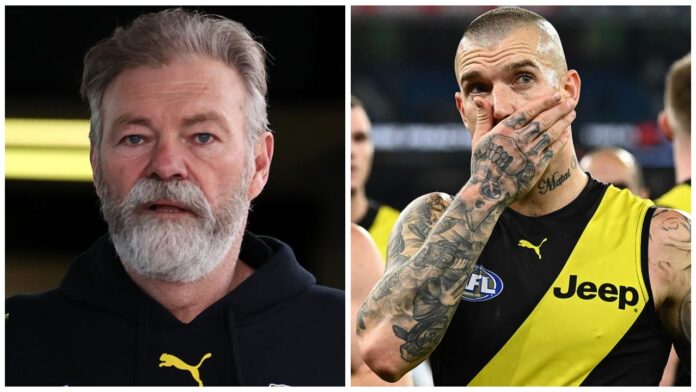 These are the contract dilemmas the Tigers face over the off-season.

However, the biggest retention of the year might just have come in the form of the club's General Manager of Football, Neil Balme.

Despite having a contract that would have seen him through until 2022, news broke over the weekend that Balme had all but agreed to make a switch to the Crows.

NEIL Balme confirmed as the new head of football at the Adelaide Crows.

The apparent departure did come as a shock to some fans, still, this shouldn't have been surprising considering reports that had been floating around over the previous 12-months.

Almost a year ago to the date, Footy Classified's Caroline Wilson reported that Balme had become surplus to requirements at Punt Road due to hub life and the development of key footballing department personnel in Tim Livingstone and Blair Hartley.

Fast forward a year and it seemed like Balme being an outsider at the club had finally taken a toll and it was time for the journeyman to move on to another project.

However, in an unprecedented U-turn, the club released a statement from the Western Australian native on Monday evening effectively committing himself to the Tigers for the foreseeable future.

"I appreciate Adelaide Football Club reaching out for a conversation, but Richmond is where my heart is and I look forward to continuing to help strengthen the Club into the future," Balme said.

Considering the controversies Richmond has had over the past twelve months, namely the kebab shop incident with Sydney Stack and Callum Coleman-Jones, as well as Damien Hardwick's relationship with a club staffer, you'd be forgiven for thinking the club was on course to implode.

Combined with a horrid 2021 season by their own lofty standards, word around the league was that the off-field noise had finally spilled onto the field.

Defensive stalwarts Bachar Houli and David Astbury also called time on their careers, the latter arguably the most surprising retirement since his defensive counterpart in Alex Rance said his farewells in 2019.

It is plainly obvious that the Tigers are the weakest they have been for the best part of five-years.

However, the retention of Balme now creates an opportunity for evolution.

It was abundantly clear this year that the Tigers need to switch things up, with teams being able to pick them apart on too many occasions.

Yes, they were undermanned at times, but so were plenty of other sides. They need to do some tinkering over the summer and luckily they have the best man in their ranks to do it.

In 2016, the much maligned 'Focus on Footy' group implored the Tigers to get Balme in, and the reedified board followed suit in doing so.

Over the summer of 2016/17, the Tigers rebranded their game style, embodying the qualities immortalised in the club's song of 'strong and bold' and translating it tactically into their strategy.

What followed was one of the most effective game-plans AFL football has ever seen - high-octane, pure pressure footy with the aim of getting the ball forward and playing purely for the man beside you.

Balme was at the helm of this change and the club's recruitment strategy over the summer too proved extremely fruitful.

Dion Prestia, Toby Nankervis and Josh Caddy all arrived at Punt Road, with superstar Brett Deledio being the highest profile departure - one that many Tigers fans thought would haunt them.

The 2016 draft too also bore so much fruit in hindsight, with current core players in Shai Bolton and Jack Graham coming in at picks 29 and 53 respectively.

The rest, as they say, is history, but this incredible rise from 13th place to lifting the premiership cup on the final Saturday in September was thanks in large part to Balme's behind-the-scenes work.

It is this stretch of previously smart recruitment that many think that the Tigers will aim to replicate this off-season, with the recommitment of the 69-year-old meaning they have the best possible man at the helm to steer them.

It should be acknowledged that the scenario at present is different to that of 2016/17 with the Tigers now aiming to sustain their success and avoid falling back into pre-2017 form, as opposed to going from mediocrity to premiership contenders.

With a massive chunk of the Tigers' spine now getting into the twilight years, it'll be down to the club's footy department to strike a balance between staying at the top of their game and ensuring the side is left in good hands for their next generation of stars.

There will be some big calls to be made over the summer and some deals to be sealed, however, Neil Balme staying a Tiger is still likely to be their biggest win of the off-season.