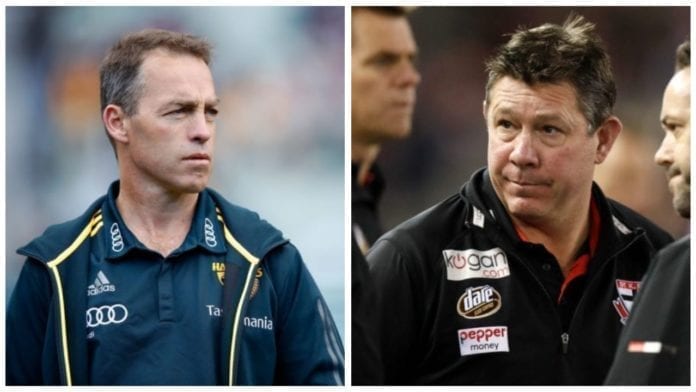 Hawthorn coach Alastair Clarkson doesn’t believe that St Kilda’s game style will hold up in bigger games after they beat his Hawks by 14 points on Sunday.

Clarkson was particularly critical of the second quarter which saw only one goal kicked, following the first quarter where nine majors were booted.

The four-time premiership coach believes that while St Kilda may have been able to play the way they did and beat Hawthorn, they may not be able to do so against some of the competition’s better teams.

Once again, Alastair Clarkson has taken a swipe at another club following a loss, this time targeting St Kilda and Brett Ratten.

However, @SCrawf9 believes the comments were all part of a bigger plan.

“They were playing a game where it was keepings off really,” Clarkson told reporters post-match.

“Especially in the second quarter where they took 42 marks and kicked one goal, they may be able to get away with it against us but I don’t think the method itself is going to lend itself to kicking a lot of goals.

“Where most of their damage was caused was when they were able to get out the back … that was some of St Kilda’s good pressure, but some of our handballing errors. When we were out, we either dropped the ball or with that fourth or fifth handball we couldn’t hit the target.

“On a couple of occasions, they were able to get out the back far too easily. That’s the St Kilda way, they’ve got speed in their front-end and they want to run into a paddock. That’s the way they score. They were able to do that a little bit easier than the way we got our goals.”

St Kilda coach and former assistant to Clarkson Brett Ratten wasn’t happy with the comments when asked about them.

Ratten said that Clarkson’s time might be better served focusing on Hawthorn as opposed to the Saints.

“That’s his comment, we’ll focus on what we can do and maybe they could too,” he said.