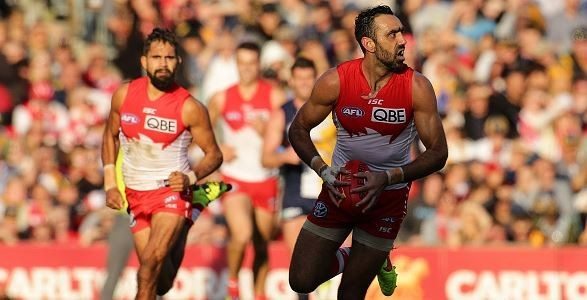 The speech that Adam Goodes gave on Australia Day in 2014 has been described as part of the reason for the animosity towards the Sydney star. But what did he actually say? Read Goodes’ speech and decide for yourself, is it really divisive?

Below is the part of the speech that has been labeled as the most divisive:

“There was a lot of anger, a lot of sorrow, for this day and very much the feeling of invasion day,” he said.

“But in the last five years, I’ve really changed my perception of what is Australia Day, of what it is to be Australian and for me, it’s about celebrating the positives, that we are still here as indigenous people, our culture is one of the longest surviving cultures in the world, over 40,000 years.

“There are people out there thinking that today is a great day for Australia — well, it is.

“It’s a day we celebrate over 225 years of European settlement and right now, that’s who we are as a nation but we also need to acknowledge our fantastic Aboriginal history of over 40,000 years and just know that some Aboriginal people out there today are feeling a little bit angry, a little bit soft in the heart today because of that, and that’s OK as well.”