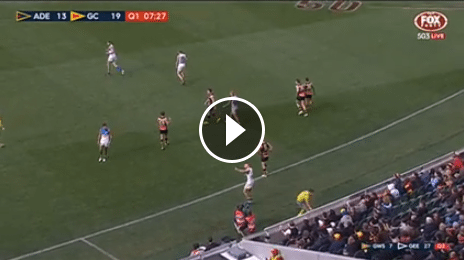 Scans have confirmed that Gold Coast skipper Gary Ablett will miss the rest of 2015 after tearing his medial ligament on Saturday.

Ablett injured his knee in the first quarter of the Suns’ clash with Adelaide on Saturday afternoon and was immediately subbed out of the match.

The club initially indicated that it might be a three to four week injury, with Ablett requiring scans on Monday morning to reveal the full extent of the damage.

But the Gold Coast captain confirmed today that he will miss the rest of the season.

“I’ve done some damage to the MCL, obviously the ligament in there. They’re saying about a grade two which will mean I’ve got to be in this brace for four weeks,” Ablett told SUNS TV.

“That probably means I’m going to miss the rest of the season which is a bit disappointing. But that’s the way it goes. I’ll just jump into rehab now and get it right for next season.

“It all happened pretty quick. I’ve seen the vision and it really didn’t look like too much.

“One of the boys fell on my ankle and his body weight went across my knee and it kind of felt like a ‘poppy’ feeling in there and I knew I’d done something to it. I went down to the rooms, did some tests and it didn’t feel great.”