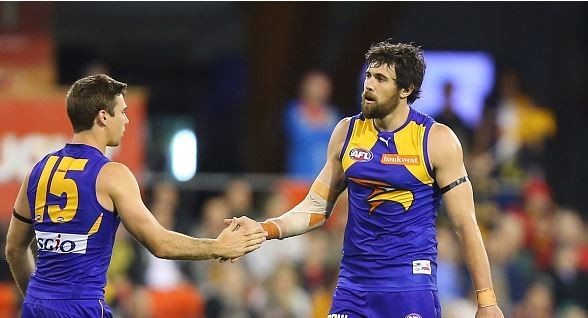 The AFL’s coaches voted on who they think is the best player in each position in a survey for AFL.com.au, plus several other issues about the state of the game.

Josh Kennedy was the overwhelming favourite as the best forward, collecting 62.5% of the votes, while Jarryd Roughead (25%) was second and Lance Franklin was third.

Alex Rance received 50% of the votes as the best defender, with Harry Taylor second with 12.5%.

Just over 30% of coaches believe that a goalkicking forward and an inside midfielder are the most important types of players, with ruckman and playmaking defender (12.5%) coming in second.

In other questions asked, 43% of coaches believe that goal kicking is the skill that needs the most improving, while 37% believe that it is field kicking that needs to be improved the most. Listening to instruction received 12.5% of the votes.

The majority of coaches (56%) believe the draft age should be higher, 37% believe it should be kept as it is and 6.25% believe it should it lowered. An overwhelming 81% of coaches believe that free agency is not evening up the competition, while 18.75% believe it is too early to tell. When it comes to extending players’ careers, the votes were split, with 43.75% saying free agency does not prolong careers and 43.75% believing it is too early to tell, while 12.5% said yes.

Hawthorn has been seen as the benchmark of the competition by many for the past few seasons and the League’s coaches agreed, with 73.33% believing the Hawks will win the flag again this season. Fremantle and West Coast both received 6% of the vote.

The Western Bulldogs have shocked everyone this year, including the coaches, with 56.25% naming the Doggies as the team that has most suprised this season. St Kilda and West Coast were equal second, both receiving 12.5% of the vote.

56.25% of coaches voted for players to still be eligible take home Charlie on Brownlow night if they have been suspended. The League has twice been left red faced when the player who polled the most votes was ineligible to win. In 1996 (Corey McKernan) and in 1997 (Chris Grant).

Just under 94% of coaches support Thursday night football. Over 60% of coaches want the Grand Final kept during the day, with 18.75% preferring a twilight Grand Final and 18.75% wanting a night match for the game’s showpiece event.

None of the coaches believe that increased media scrutiny is good for the game. 31.25% believe it is bad for the game, while 68.75% simply say it is inevitable.

Coaches appear unhappy with the skills of current players, with 56.25% believing that players should come into the AFL system with the ability to kick on both the left and right foot.

The majority of coaches agree that the AFL’s Level Four Senior Coach course should be completed before anyone becomes a senior coach, with 62.5% voting in favour of the concept.